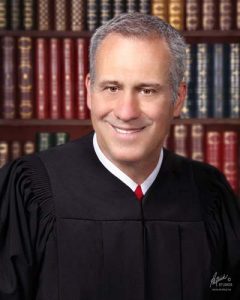 John Michael Chmura was born in Detroit and lived the early part of his life in Poletown with his parents and maternal grandparents. With three of his four grandparents born in Poland, he grew up in a Polish-speaking household and became familiar with all of the important Polish customs observed by immigrant families living in Detroit during the 1960s.

In 1965, Judge Chmura’s parents bought a house in Warren which is where he grew up with his brother, Mark, who currently resides in Arizona with his wife and three children. The judge attended Beaver Elementary, Carter Junior High, and Cousino Senior High Schools, all in Warren.

Judge Chmura attended Michigan State University earning a Bachelor of Arts degree from James Madison College, a liberal arts institution. He attended the University of Wisconsin Law School in Madison where he was awarded his law degree in 1988.

Returning to Warren, Judge Chmura began his professional career by working as a staff attorney for Hyatt Legal Services. In 1991, he established his own practice. Soon after, he was appointed by Attorney General Frank Kelley as a Macomb County Public Administrator and began specializing in probate law. Governor John Engler appointed him to the 37th District Court bench in 1996 where he now serves. In October of 2008, the Michigan Supreme Court appointed him chief judge.

Judge Chmura married Ann Marie (née Francis) in 1993. They have two children, Jonathan (age 13) and Andrew (age 11), both of whom attend St. Anne School in Warren. All are members of St. Anne’s parish.