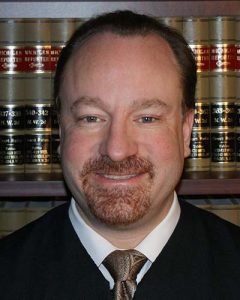 Judge Michael C. Chupa was appointed to the position of District Judge for Warren and Center Line on December 18, 2013 and was unanimously elected to continue in that position in November of 2014.

Judge Chupa left the law firm Chupa and Associates, a firm he founded in 1995, to assume the responsibilities of District Court Judge. He and his sister, attorney Jennifer Chupa, worked together for many years serving Warren clients. Mr. Chupa specialized in criminal defense work and complex real estate transactions. He commenced working in the legal field on June 3, 1991 by prosecuting cases on behalf of the city of Warren in the same courtroom he now presides in. Judge Chupa was instrumental, as a volunteer defense attorney, in establishing and helping operate a drug/ sobriety court in the 41B District Court.

Judge Chupa was born and raised in Warren and has been very active in his community his whole life. He enjoys involvement with local charities believing strongly in the principal that to whom much is given much is expected.

Judge Michael C. Chupa is a graduate with a Bachelor of Science degree from Wayne State University and his Juris Doctorate from Detroit College of Law. He graduated from Immaculate Conception School, now located in Warren. Judge Chupa is married and he and his wife have three amazing children.